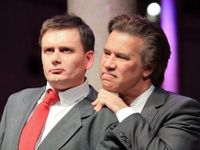 Periklis Liakakis’ modern opera "Chodorkowski", which won the prize for 2017 Best Independent Opera Production at the Austrian Music Theatre Awards, will be given its Greek premiere. The opera is about the rise and fall of Russian oligarch Michael Chodorkowski, who stood against Vladimir Putin in the ’90s. I look forward to playing the scheming KGB Boss Setschin.